Visit Kielce, Poland – a Perfect City for the Weekend Trip!

Kielce, Poland is the capital of the region I spent my early years in. But, as it often is with the places we come from, I haven’t had a chance to visit Kielce in a very long time, it’s been on my list of places to visit in Poland for ages (I will make it there eventually!). 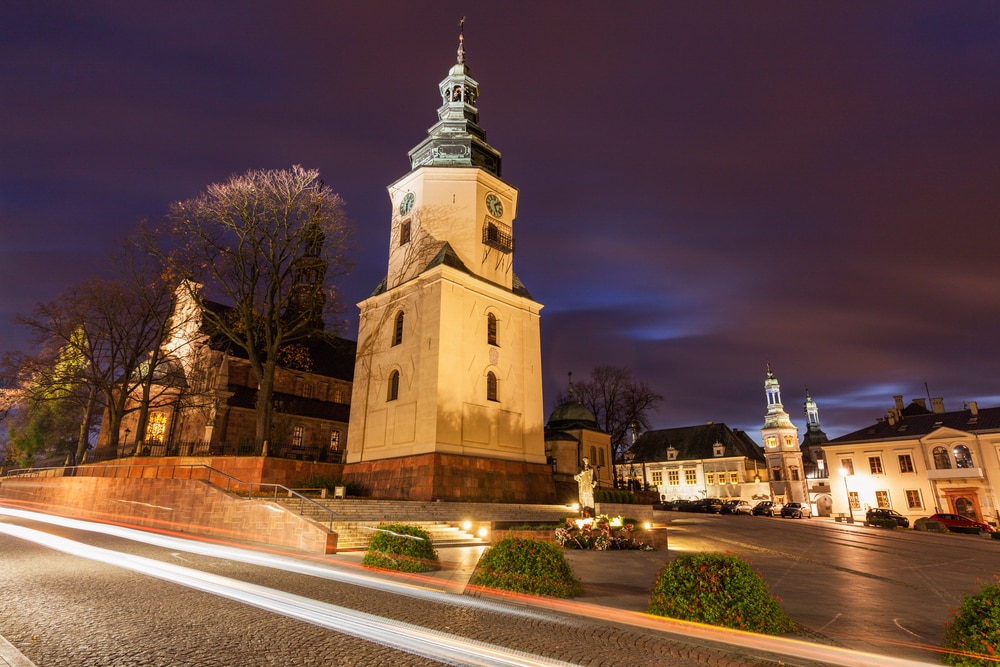 Fortunately, a fellow Polish blogger and Kielce local Jakub from the blog Tym Razem wrote this Kielce guide to tell us here how interesting his hometown is. You can read below all about the best things to do in Kielce!

If you are thinking about visiting Poland you most likely have Warsaw, Gdańsk, or Kraków on your mind. But Poland has so much more to offer! Smaller cities, villages, castles, or national parks are waiting for you! And Kielce is the perfect example of a city which you probably haven’t heard about but you need to visit!

A brief history of Kielce

The history of Kielce starts about one thousand years ago. It was a small village close to the forest. People were living there, hunting and exchanging goods.

The oldest traces of human settlement come from the area of today’s St. Wojciech church. For many years Kielce was the property of the Krakow Bishops (from the 12th to the 18th century).

The history of the city was turbulent, and Kielce itself had better and worse moments. There was a big Jewish community in Kielce before World War 2 and traces of it are still visible.

Currently, it is the capital of the Świętokrzyskie region, inhabited by almost two hundred thousand people. 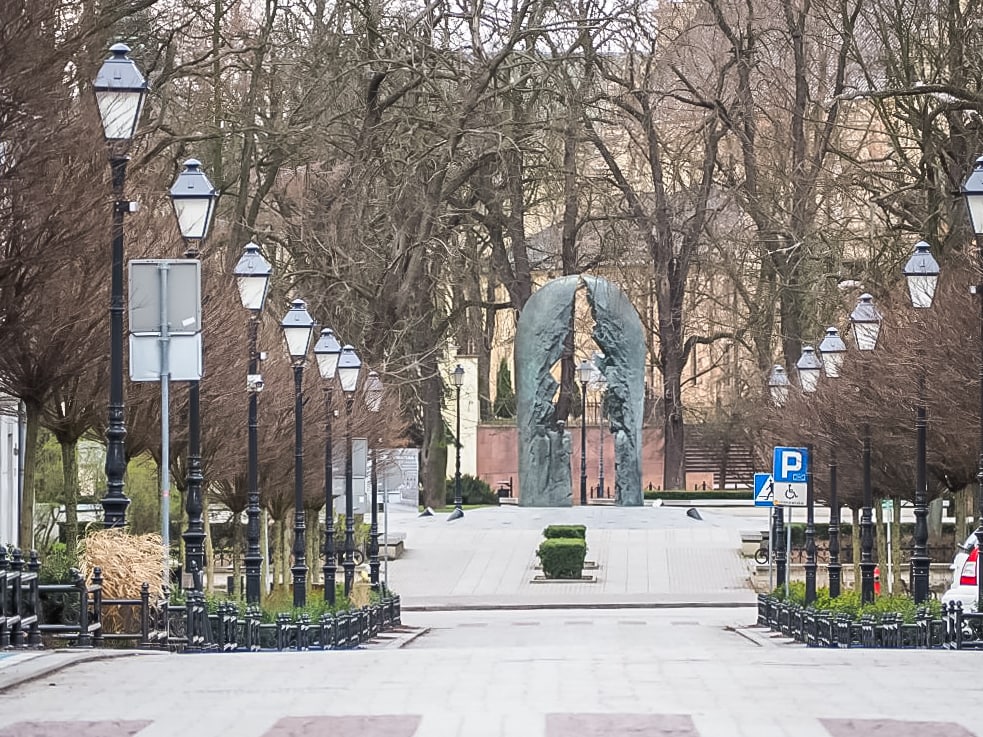 What to see in Kielce

Kielce is located near the Świętokrzyskie (Holy Cross) Mountains, but there are five nature reserves in the city itself. Four of them are geological reserves (Kadzielnia, Wietrznia, Ślichowice, Biesak-Białogon) and one landscape reserve, but strongly related to geology – Karczówka.

You can write a long article about each of them, but today I will tell you about the one that is closest to the city center – Kadzielnia. It is only 1.5 kilometers away from the main street (Sienkiewicza).

Kadzielnia is located in the former Devonian limestone quarry, where the exploitation was carried out from the 18th century. You will find there interesting minerals, fossils and observe karst phenomena. There are twenty-five caves in the reserve, three of which are combined into one system that is available for sightseeing. 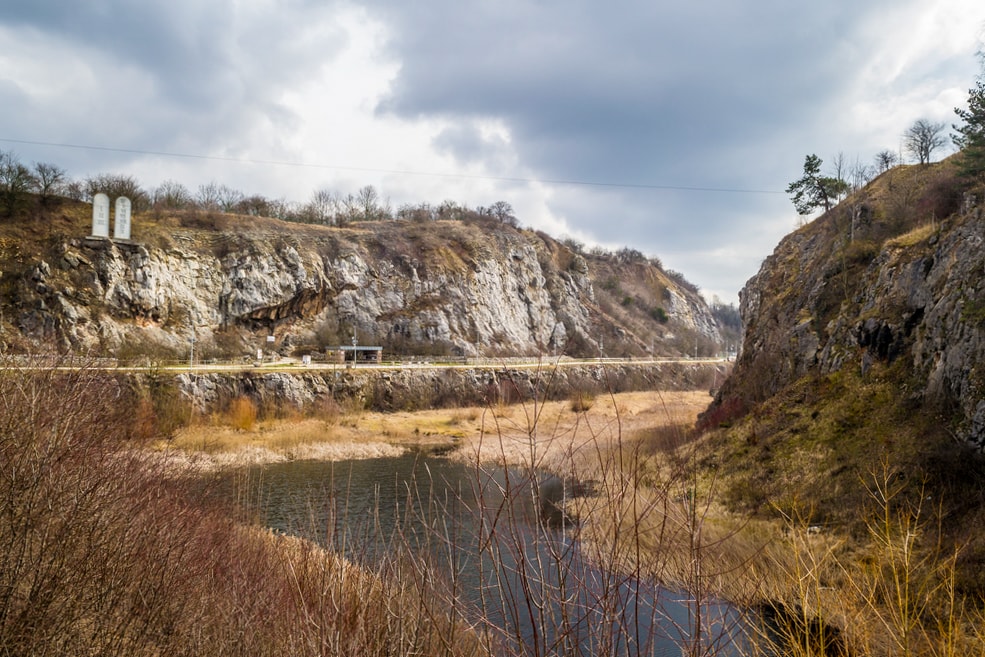 There are more attractions in Kielce than just nature reserves. Among the many interesting place to visit in Kielce, it is worth looking at a few. During your weekend trip to Kielce, you can visit a lot of them – plan carefully!

Castle Hill is the center of the former bishop’s area. The beautiful cathedral and the Palace of Krakow Bishops overlook the city. It is worth going there for a walk during the day and in the evening, when the illumination adds a different dimension to the objects.

Currently, the Palace houses the National Museum, and behind the building, you can walk around the Italian garden. The Palace itself is considered to be one of the best-preserved baroque palaces in Poland and even Europe. In the past, it was the Academy of Mining, founded by Stanisław Staszic, and Józef Piłsudski had his headquarter there.

The Castle Hill complex also includes several other buildings in the vicinity of the palace. Among them, it is worth mentioning the Design Institute and the Center for Patriotic and Civic Thought – both facilities located in the former prison in Kielce.

While on Castle Hill, it is worth going to City Park. It comes from the first half of the 19th century and is considered to be one of the oldest city parks in Poland. It is worth taking a walk among the old and magnificent trees. From the west, the park ends with a pond where we can meet mallard ducks.

In the park itself, you will find some interesting sculptures. Among them, it is worth mentioning the bust of Stefan Żeromski (the first monument to a writer in Poland), the bust of Stanisław Staszic, and the figure of John of Nepomuk. 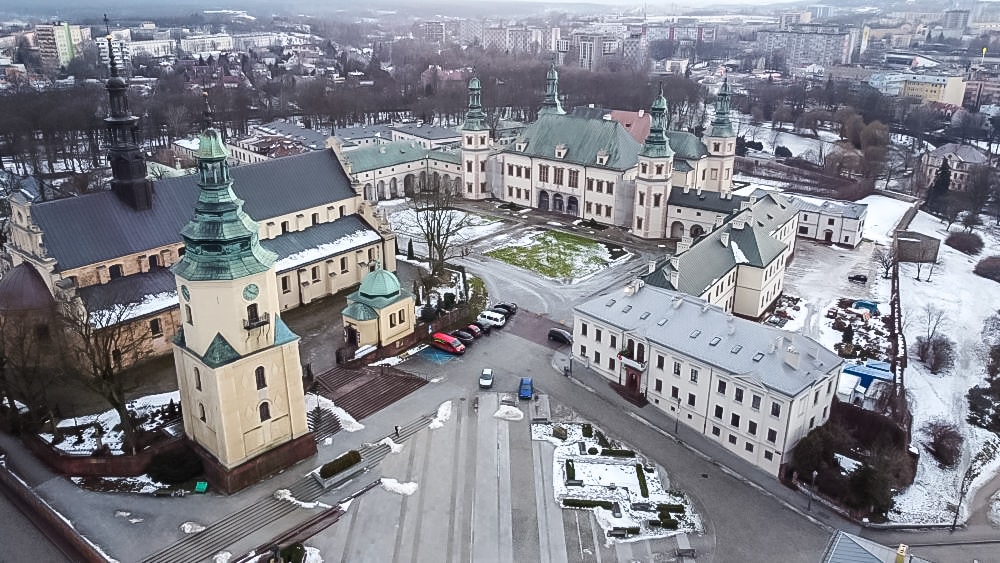 Another place worth visiting in Kielce is Market Square. It is true that the city in 1800 was hit by a fire and most of the buildings burned down then, but those that you can see there today also have their charm. In summer you can drink beer and eat something in the open gardens.

When in Market Square, be sure to pay attention to the shape in the middle – it is a representation of the foundations of the former town hall, which was destroyed in the fire. 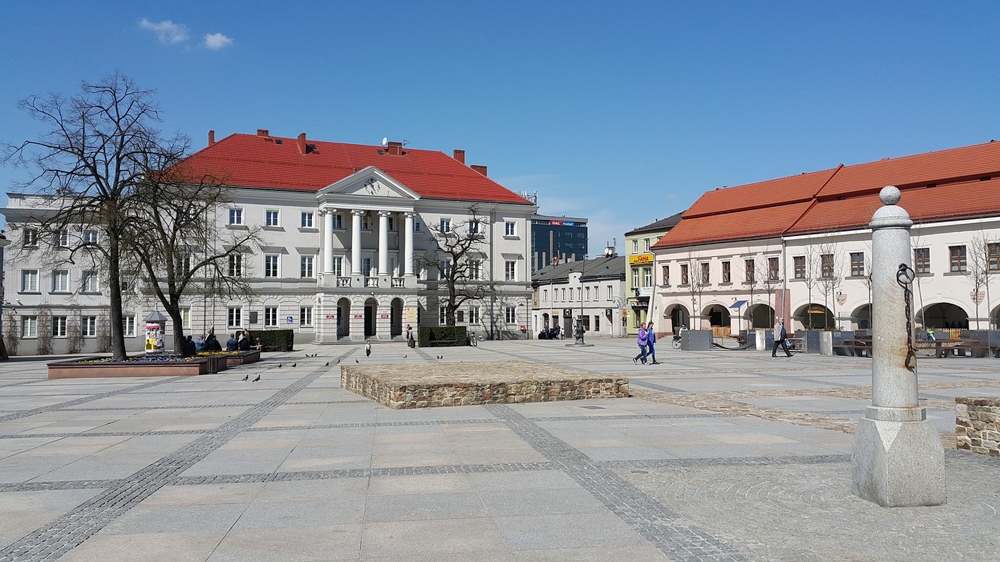 The representative street of Kielce is Sienkiewicza street. It measures over 1,200 meters and runs from today’s Kielce Cultural Center to the Railway Station. Its origins date back to the beginning of the 19th century. On Sienkiewicza Street you will find many interesting spots – the Evangelical-Augsburg Church, the Stefan Żeromski theatre, or Hotel Bristol. At sunset, it looks very nice – be sure to take a walk in the evening.

Another place worth visiting in Kielce is the Museum of Toys and Play. Located in the former market halls at the former bazaar square, it welcomes children and adults. In addition to the permanent exhibition on a variety of toys from the old days, it is also worth following temporary exhibitions. Among the projects implemented so far, it is worth mentioning the one dedicated to old game consoles or dollhouses from around the world.

In the season, various cultural events take place in the courtyard of the Museum of Toys and Fun, in which all guests are happy to participate. If you are in a dignified vicinity of the museum, pay attention to the clock above the entrance gate. If you are lucky, you will see the symbol of the region – a witch on a broomstick with the accompaniment of the regional song “Da moje Łysico”.

If you like a bit more modern architecture, and at the same time old, then be sure to check out the bus station. This structure, dating from 1984, has recently undergone renovation and its effects surprised everyone. The station’s shape is UFO and it is a fully functional transport center. 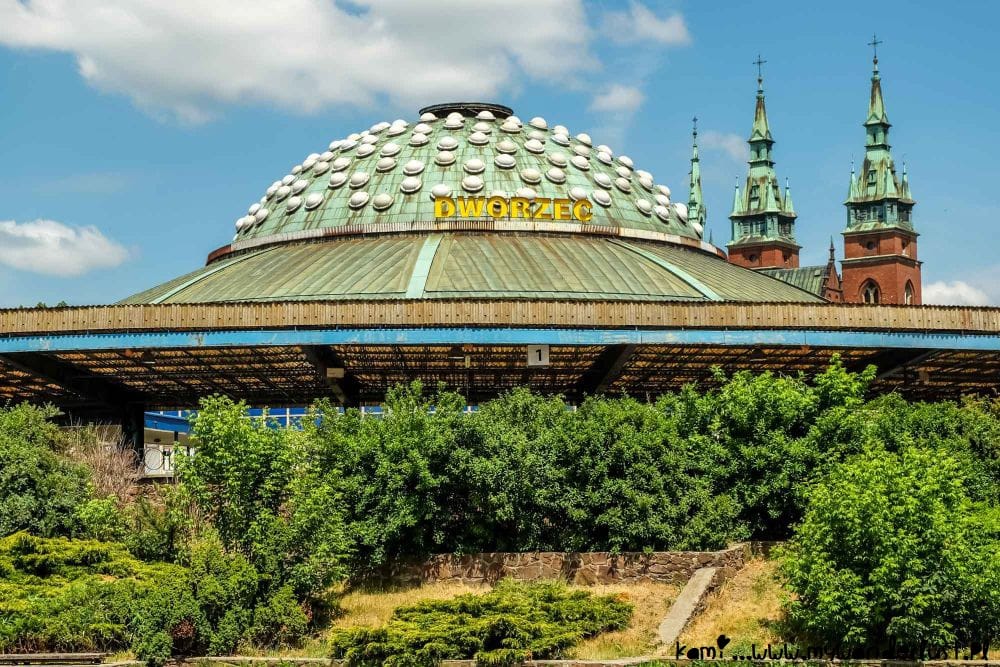 You may have read about geological reserves before, but in one of them – Wietrznia – you will find a fantastic place – the Geoeducation Center. On a modern and interactive exhibition, you will travel back to the times when there was a sea in the Świętokrzyskie (Holy Cross) Mountains! Fun guaranteed, and the capsule with a 5d cinema at the end of the tour will surprise both the youngest and slightly older guests.

During the tour, you will get to know many interesting animals that used to live in the oceans in the past, and after visiting the entire exhibition, you can go to the roof of the facility, where there is a small garden of experiences.

I have already mentioned that the Geoeducation Center is located close to the Wietrznia reserve. When you finish visiting the building, it is also worth taking a look outside it and taking a walk along the educational paths marked in an old quarry.

What to see near Kielce

Kielce has an excellent location. Once you visit the city itself, you should see Kielce’s surroundings too.

On the one hand, the Świętokrzyskie Mountains with Łysica and the Holy Cross, on the other, technical monuments such as the Samsonów or the ruins in Bobrza, and on the third, Chęciny with the castle towering over the city, or Tokarnia with one of the most beautiful open-air village museums in Poland. All this at a distance of several kilometers.

Święty Krzyż, also known as Łyśc, is another peak that can be reached via an asphalt road or the Royal Route from Nowa Słupia. A thousand-year-old monastery awaits you at its top, which you can visit or pray in. 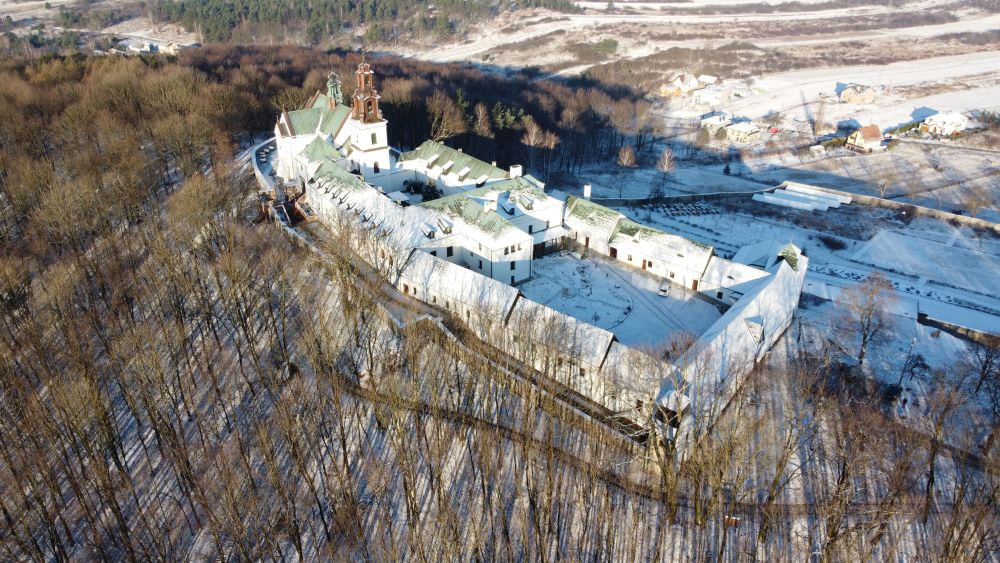 Samsonów and Bobrza are places connected with the industrial past of the region. Large-scale iron production fueled the local economy in the past.

We have a lot of castles around Kielce but Chęciny castle is one of the most recognizable. It is located on the top of the hill and looks fabulous. 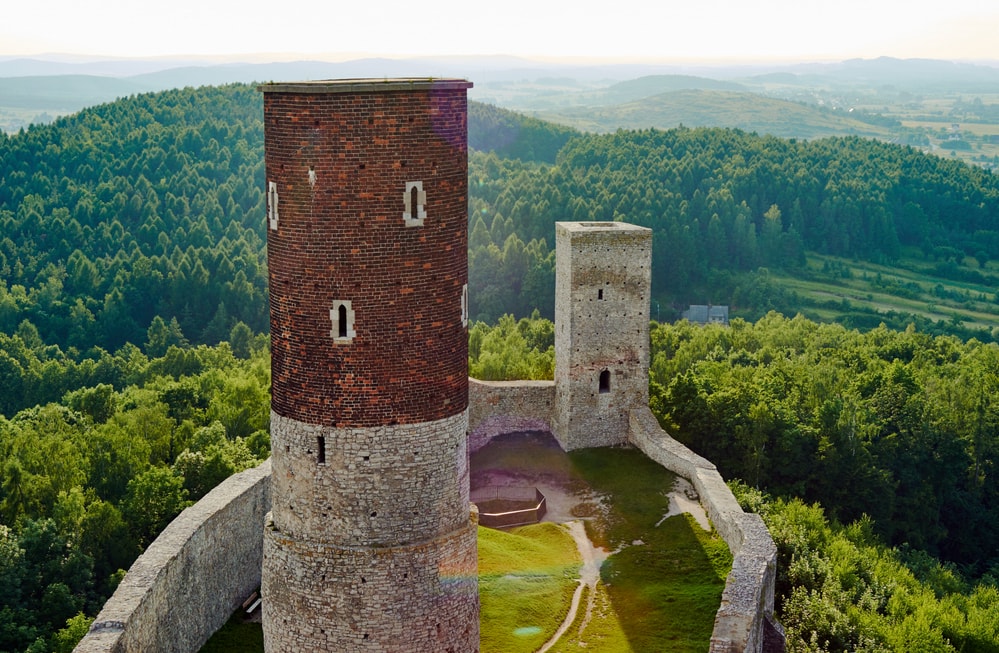 If you like geology, there are many interesting places related to this subject in the vicinity of Kielce. Former quarries today reveal to tourists rocks from millions of years ago, in which interesting minerals and fossils await you.

Is it worth visiting Kielce? Definitely yes. It is a city that has everything. It is compact, has a lot of tourist attractions, and is an ideal option for a weekend in the Świętokrzyskie (Holy Cross) Mountains.

About the author: Jakub Juszyński – marketer, blogger, traveller. He doesn’t like to be bored, prefers to discover closer and further places. He looks for the undiscovered, often enriching travel experiences with local flavors! You can follow Jakub’s blog Tym Razem and find him on Facebook and Instagram.

If you would like to discover less known places in Poland I have a few articles that you might find interesting:

Revolut bank card is the best way to save money when traveling. It’s a pre-paid service that offers very good exchange rates and no fees for ATM’s use. Click here to learn more and order your Revolut card.

You can find the best accommodation options at Booking. They have many discounts and excellent customer service. Click here to look for the place to stay in Kielce

Never travel without travel insurance, you never know what might happen and better safe than sorry. You can check the insurance policy for Poland here.

I recommend joining organized tours to get to know the place better and to visit more places during your trip. You can find a great selection of tours at Get Your Guide – click here.

Make sure to have the offline map always installed on your phone, they can save you so many troubles. I always use the free app Maps.Me. 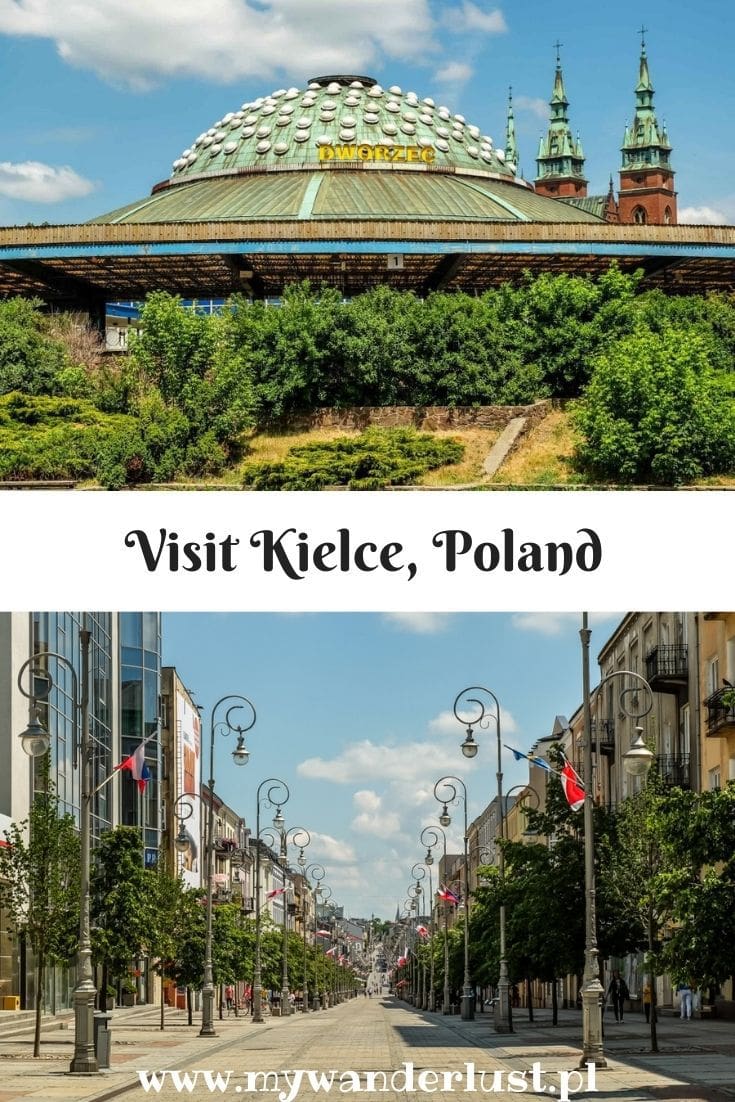 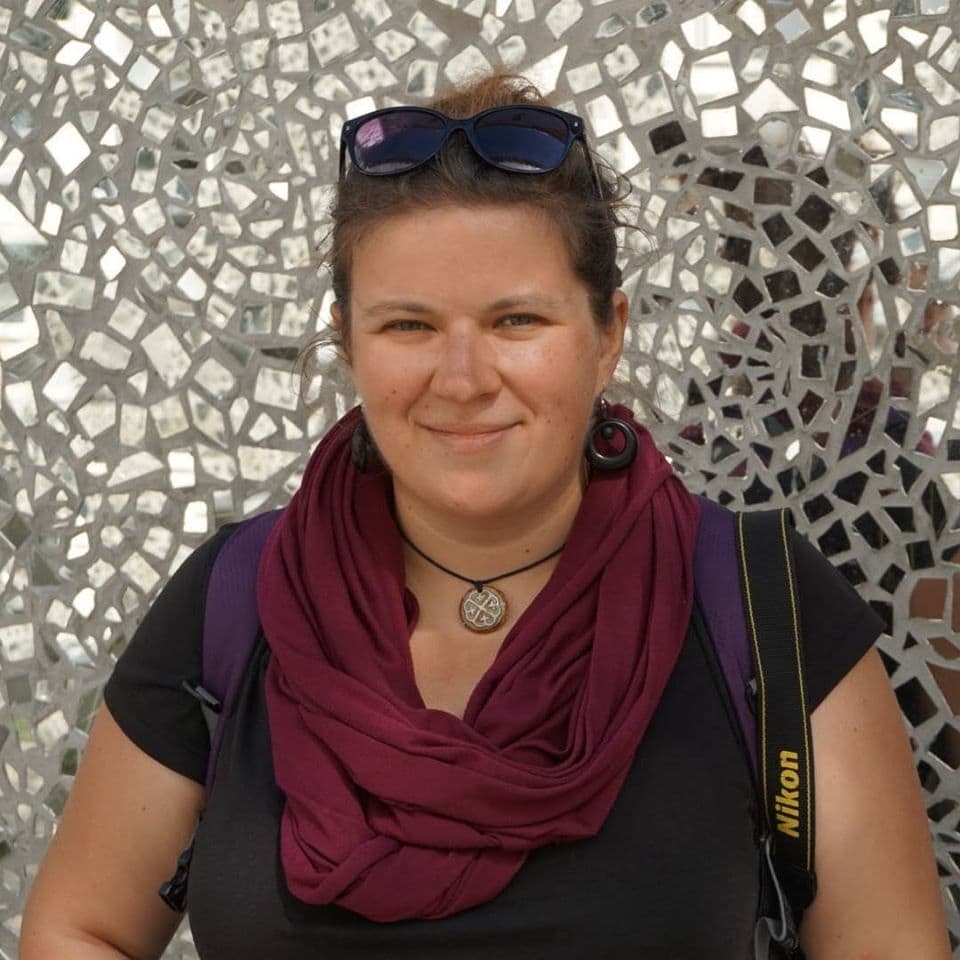